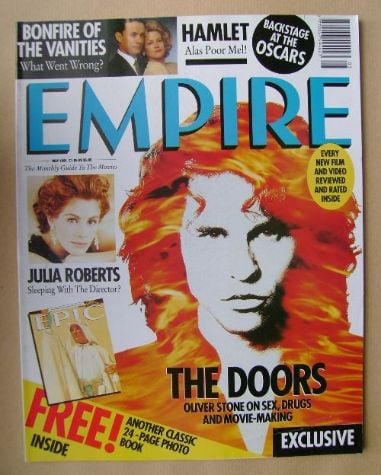 Good condition - some light wear and creasing to front cover

The 24-page photo book is NOT included

JULIA ROBERTS - Why is she the biggest movie star in the world today? We talk to the men who think they know...

HAMLET - For his third celluloid Shakespearian offering, Italian director Franco Zeffirelli chose none other than muscular Mel Gibson as the melacholy Dane. "They were ready with the knives out," he assures Angie Errigo...

BILL MURRAY - Last heard of nearly two years ago with Ghostbuster II, Bill Murray finally bounces back with his directorial debut, Quick Change. "It is," he tells a curious Phillipa Bloom, "the best film ever made"...

THE OSCARS - Barry McIlheney backstage at the Oscars

GRAFFITI BRIDGE - In 1984, Purple Rain made $80 million for Prince. So what's happened to his latest directorial venture? Chris Heath reports from Paisley Park on the strange case of the disappearing movie...