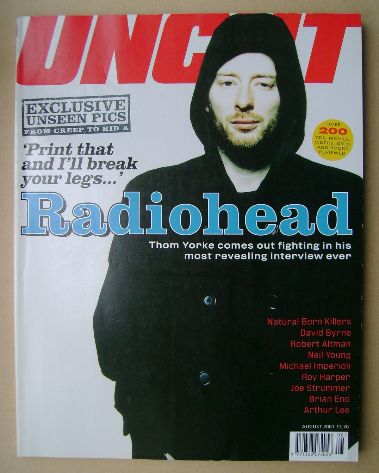 DAVID BYRNE - The former Talking Heads mastermind on his new solo album, Look Into The Eyeball

MICHAEL IMPERIOLI - The Sopranos star talks about the hit TV series, working with Scorsese and Spike Lee, and life as an Italian-American

RADIOHEAD - As Radiohead prepare to play two massive sold-out open-air concerts in their hometown of Oxford, Thom Yorke talks to Uncut about paranoia, the press, depression, resentment, tyranny, obsession and how to dismantle your own career, plus previously unpublished pictures

ROBERT ALTMAN - Despite the success of M*A*S*H, Nashville and The Player, his critics have often been eager to write off director Robert Altman. But, as he tells Chris Roberts, he'll keep battling to the end to bring his unique brand of film-making to the screen

BRIAN ENO - After he left Roxy Music in 1973, Brian Eno became a key figure in the development of electronic music - in the Nineties, NME dubbed him 'the most influential man alive'. Paul Morley meets the self-deprecating big-head