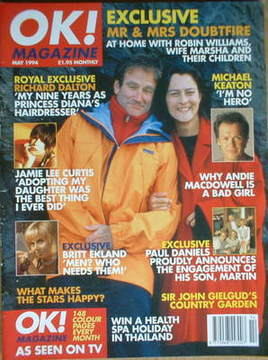 OK! magazine - Robin Williams cover (May 1994)
Good condition for age - magazine has been read once

ROBIN WILLIAMS AND MARSHA WILLIAMS Pictured exclusively at their new home overlooking San Francisco Bay, Robin and his wife Marsha talk about the joy of working together on Mrs Doubtfire and their hopes and fears for their children
8 pages

BRITT EKLAND Reveals her plans for the future
6 pages

HAIR: BY ROYAL APPOINTMENT
As hairdresser to Princess Diana for nine years, Richard Dalton was possibly her closest confidante. Responsible for the looks that launched a thousand headlines, the top stylist travelled the world to ensure his royal client never had a hair out of place. He reveals to us how he created the styles that beguiled the world
8 pages
(Includes double page photo of Richard Dalton and Stephanie Beacham - 10 photos of Princess Diana (with quotes from Richard on each hairstyle) - plus 2 full page photos of Princess Diana

THE DANIELS FAMILY
At the home of magician Paul Daniels and his wife Debbie McGee, Martin Daniels and his fiancée Joanne Etherington talk exclusively to us about their fairytale romance and forthcoming wedding
6 pages

THE PLAZA HOTEL "The greatest hotel in the world"
The star of 33 films, the Plaza Hotel in New York is much more than just a building. To its owner, Donald Trump, it's a masterpiece
5 pages

LESLIE PHILLIPS Next to his wife Angela, the love of actor Leslie Phillips' life is his classic Mercedes Cabriolet - and he wouldn't part with it for anything
3 pages

DERRICK EVANS Shares some of his favourite dishes
3 pages

THE PRINCES OF THE POISON PEN
OK! magazine dared to invite those princes of the poison pen, Fleet Street's gossip columnists, to a grand reunion, held in their honour at The Dorchester Hotel
6 pages
(Features: Nigel Dempster, Peter Tory, Garth Gibbs, Rohan Daft)

WINONA RYDER The rumours flew the day Winona collapsed on set. Now she reveals the painful truth about that day and how it has changed her life
4 pages

SIR JOHN GIELGUD Who celebrates his 90th birthday in April, invites us to share his pride in his garden
3 pages

TOMMY STEELE "The day that changed my life"
1 page