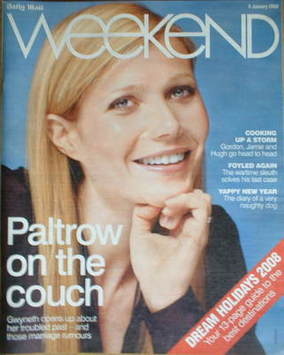 GORDON RAMSAY, JAMIE OLIVER, HUGH FEARNLEY-WHITTINGSTALL The oven gloves are off, the knives are out - take your seats as Gordon, Jamie and Hugh stage a clash of the kitchen giants

GWYNETH PALTROW Even at her lowest ebb - when she was dating Brad - Gwyneth Paltrow bottled it all up. Now her silence is fuelling gossip about her marriage. Here, she sets the record straight
1 and a half pages

KONNIE HUQ After ten 'sensible' years presenting Blue Peter, Konnie Huq is leaving to make some real money in the grown-up world. And her young fans could be in for some surprises, she reveals...

MALCOLM MCLAREN Trouble is never far away when the godfather of punk is around. But, as he tells us, that's what he gets paid for, and he hates to disappoint

TAGGART is ITV's longest-running drama at 25 years old. As the latest series begins, we go behind the scenes of a programme that has seen some of television's most spectacular murders