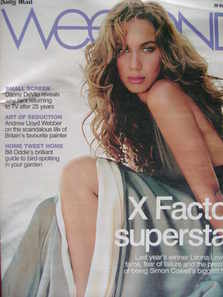 LEONA LEWIS Won last year's X Factor then fell off the radar. She's finally finished her first CD, but has she left it too late to cash in? Or will she be Simon Cowell's greatest triumph of all?

CHRIS DE BURGH Is a loving father - but painfully possessive, says his daughter ROSANNA DAVISON, a former Miss World. Will he ever cope with her growing up?
1 page

DANNY DEVITO Being drunk on TV would spell disaster for most stars. But Danny DeVito used it to launch a lucrative new career

ALISON MOYET Stardom took singer Alison Moyet by surprise - and scared her so much she hid herself away for 15 years. Now she feels ready to face the world again

TAMARA CZARTORYSKI-BORBON She's a bona fide Polish princess, so why did she choose a life of parties and bad boys?

ANDREW LLOYD WEBBER His musicals have made millions, but Andrew Lloyd Webber's real passion is his collection of Victorian paintings. As a major exhibition opens at Tate Britain, he extols the genius of the man he calls the Mozart of fine art

THE VICAR OF DIBLEY
1 page