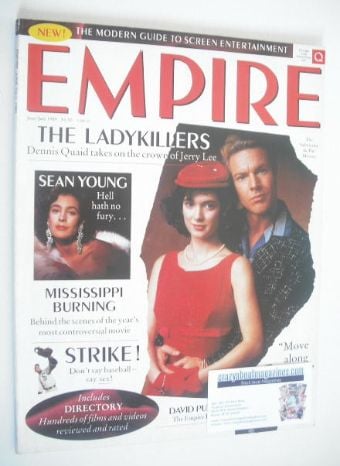 THE RISE OF THE BASEBALL MOVIE - 2 pages

SEAN YOUNG - One and a half pages

MISSISSIPPI BURNING - It was nominated for seven Oscars. It collected just one, for cinematography. It placed a director from Islington at the centre of a major furore about movie business ethics and Hollywood's attitude to black history. Patrick Goldstein went on location with Parker, Hackman and Dafoe into the swamps of the Deep South
7 pages

BOND AND THE HITMEN - Write a James Bond theme song and you can confidently anticipate a hit record and some much-prized international profile. Chris Heath watches the contenders slug it out
4 pages

A CRY IN THE DARK - The Dingo Baby Case began on August 17, 1980 when little Azaria Chamberlain disappeared on a camping holiday near Ayers Rock in Australia's Northern Territory. For the next eight years the debate over who killed her - a wild dog or her own mother - divided the country while the drama unfolded in the media and the courts. Phillipa Hawker reports from Melbourne on the extraordinary story now retold in Meryl Streep's new film A Cry In The Dark
5 pages

THE YOUNG PRETENDER - Jerry Lee Lewis fell from grace in 1956; the descent has been slow, controversial and punctuated by violence. His feelings about being depicted on screen by $3 million-a-movie sex symbol Dennis Quaid could be best described as mixed. Patrick Goldstein reports from the Memphis set of Great Balls Of Fire
5 pages