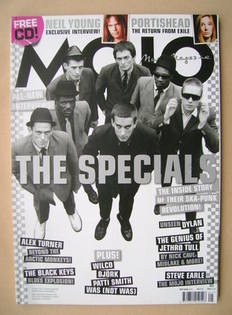 Good condition - some wear to cover

PATTI SMITH - The punk godmother on surviving loss, poetry and portholes of consciousness

STEVE EARLE - The revolutionary Texan troubadour takes us through the 12 steps of his tumultuous life, from teenage smack lessons to twenties tearaway, adult addict and American agitator

THE BLACK KEYS - After six years crafting stripped-down blues magic, The Black Keys have made their best album yet... with Gorillaz producer Danger Mouse! Sylvie Simmons went to a snowy Akron to share burgers and small-town philosophy with the guitar'n'drums duo

PORTISHEAD - "Don't call it a reformation," say the enigmatic Bristolian trio, back with a third album of drones, murk and weird. "We've never been happier," they tell David Sheppard

JETHRO TULL - Clad in his father's old mackintosh, Ian Anderson created a whirling dervish of an alter-ego that defined Jethro Tull's eccentric agrarian vision. While Nick Cave, Midlake and The Decemberists help Mojo celebrate the band's 40th anniversary, the flute-wielding frontman protests: "I had zero credentials to be a rock star!"

NEIL YOUNG - His new Crosby, Stills, Nash & Young movie is no mere concert film, it's a political broadside against Bush, America and the Iraq war. In a Mojo exclusive, Young speaks to Martyn Palmer about friendly persuasion, the 'war on terror' and finding a new fuel

THE SPECIALS - Out of the inner-city misery and post-punk experiment of the late '70s came a group of black and white Coventry kids called The Specials who changed the way Britain dressed, danced and thought. Thirty years on, they've set aside their differences to talk to Mojo. "We were aiming for revolution," they tell Lois Wilson, "we were trying to change minds"