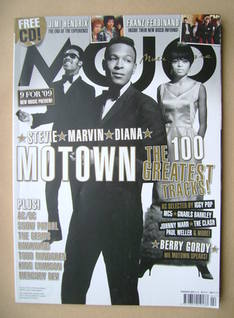 The free CD supplied with this issue is NOT included

TODD RUNDGREN - Hailed as the man to take The Beatles' crown, he packed in pop for prodigious prog profligacy and peerless production work. Peter Doggett quizzes the ever-changing dude on his mad past and the madness to come

FRANZ FERDINAND - They've been lost for three years, and enjoyed it. But now the thinking-person's pop band have crafted a throbbing, electronic grooveathon. Not what we expected, says Andrew Perry. Exactly, say the band

MITCH MITCHELL - Sandwiched between the US guitar legend and a grumpy bassist was a cheeky drum urchin who was the heartbeat of The Jimi Hendrix Experience. Mat Snow pays tribute to the sticksman and looks back on the making of the trio's last great album

BERRY GORDY - He began building the greatest soul empire of all time with a meagre $800 deposit, creating a star system like no other. As Motown celebrates its golden anniversary, Berry Gordy talks exclusively about the ambitions and emotions that drove his dream. "I was in charge, but I made logic the boss," he tells Geoff Brown
6 pages