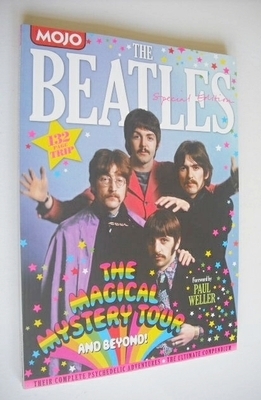 TURN ON, TUNE IN - Experimenting with drugs and oriental religion not only changed The Beatles and their approach to music, it also changed them as people. As a result, the Fabs helped usher in a new day-glo era
8 pages

UNSEEN PICTURES! - Photographer Henry Grossman's candid photos of The Beatles' homes and parties have never been published. Until now!
10 pages
RUBBER SOUL - The album that sounded the death knell for the mop top-era Beatles and signalled a musical sea-change for, well, everyone
4 pages

HELLO GOODBYE - The day before their last-ever gig, at Candlestick Park, a sarcastic yet playful Beatles gave their final press conference as a touring band. Plus: the late Jim Marshall's account of his shots of that final show
8 pages

REVOLVER - In 1966 The Beatles were already the greatest pop group to have existed. But it would take William Burroughs' ex-boyfriend, a plastic bag of tape loops and LSD to nudge them to the next, unimaginable level of creativity. McCartney biographer Barry Miles tells of the bookshopping, bad puns and blown minds that fed into Revolver
8 pages

PASSAGE TO INDIA - After the chaotic final US tour, George Harrison escaped to India to learn both the sitar and how not to be a Beatle
6 pages

SGT PEPPER - Sgt Pepper's Lonely Hearts Club Band blew the minds of a generation and changed music forever. John Harris explores the impact and legacy of the most underrated album of all time, featuring interviews with George Martin and Peter Blake
18 pages

BRIAN EPSTEIN - Brian Epstein's belief in 'his boys' was unshakeable, and when he died, part of The Beatles died too. But did he sense the dream going sour before his overdose? Jim Irvin investigates
8 pages

INTO THE VOID - The 67 key moments that encapsulated The Beatles' psychedelic years, from turning on with Dylan to the Manson murders
18 pages