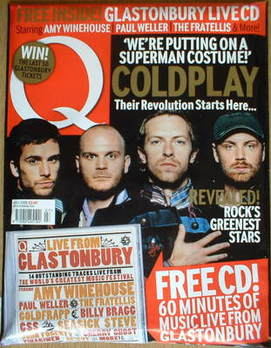 Amy Winehouse (Back to Black)

CSS (Off The Hook)

COLDPLAY According to Chris Martin, Coldplay haven't done anything good yet. Hence Viva La Vida, the band's very own revolution in sound, inspired by paintings of watermelons and "Mrs Battersby's scones"

SIGUR ROS It was a simple idea: spend two months with Sigur Ros as they make their new album-come-multimedia art extravaganza. What could go wrong? Well, lots actually...

JON BON JOVI Today, Jon Bon Jovi is no mere rock star, but also an entrepreneur, a charitable fund-raiser and a political activist. One thing hasn't changed: he is not well hung