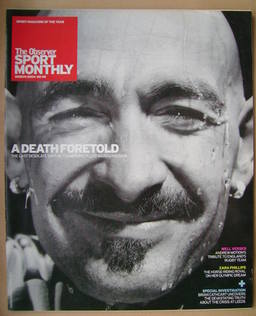 JUAN PABLO MONTOYA - Grace Bradberry was trackside with Juan Pablo Montoya as his bold challenge for the F1 title fell apart last season. Now she rejoins him as he steels himself for another battle with Michael Schumacher. Here the tempestuous Colombian reveals how marriage has changed his life - and why this, at last, will be his year

LEEDS UNITED FC - They were the most exciting team in Europe, serious challengers to Manchester United - and even to Real Madrid. Then the implosion began. Now, one question remains - just how did Leeds United fall so far, so quickly? With unprecedented access, award-winning journalist Brian Cathcart follows the labyrinthine money trail and gives the definitive account of what went wrong

7 and a half pages

MY KINGDOM FOR A HORSE - Britain's three-day eventers are strong favourites for Olympic gold this summer. Caroline Boucher met the contenders - including young royal Zara Phillips, who reveals all about her life in and out of the saddle

MARCO PANTANI, adored by thousands when he won the Tour de France, died last month, alone in a hotel room and surrounded by drugs. Matt Rendell, who knew the Italian cyclist well, returned to Rimini to uncover the truth about his tragic last days

JURGEN KLINSMANN - No foreign player had as much impact in one English season as Jurgen Klinsmann. Now the Tottenham hero lives in California, where he told Andrew Anthony exactly what he thought of Alan Sugar, why he's now ready to become a manager - and why he can't believe that anyone would ever accuse him of diving