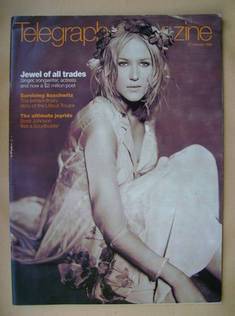 CAROLINE AHERNE - In the past, Caroline Aherne has found Mrs Merton's life much easier than her own. Now, she tells us, they are both doing very nicely thank you
2 pages

PERLA OVITCH - It's a story so awful, it is almost beyond belief. A family of seven dwarfs were rounded up by the Germans and sent off to Auschwitz to be gassed with millions of their fellow Jews. They were saved only because the Nazis wanted to perform experiments on them. Now only one of the Lilliput Troupe survives. Perla Ovitch tells her story to Yehuda Koren
6 pages

JEWEL - She's a pop phenomenon, selling 10 million copies of her debut album and landing a starring role in Ang Lee's new film. On the eve of her British tour, Jewel speaks to Neil McCormick
3 and a half pages

EDWARD NORTON, Oscar-nominated for his role as a sympathetic neo-Nazi in 'American History X', talks to Douglas Brinkley
3 pages