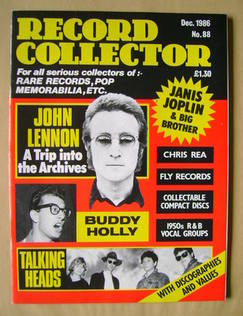 Peter Doggett reviews "Menlove Avenue", the new collection of unissued Lennon material, and looks at the possibilities for future releases

JANIS JOPLIN AND BIG BROTHER - Big Brother & the Holding Company were one of San Francisco's major bands of the Sixties, before Janis Joplin was persuaded to leave them for a solo career

BUDDY HOLLY - Nearly three decades after his death, there is still unreleased Buddy Holly material in the vaults, which seems likely to surface over the next few years

CHRIS REA - Dave Thompson talks to the Geordie singer-songwriter who has established a strong and loyal cult following, thanks to albums like "Whatever Happened To Benny Santini", "On The Beach" and "Shamrock Diaries"

FLY RECORDS - R. Bates tells the story of the record label which was launched with T. Rex's first hit, and also released material by the Move, Joe Cocker and Procol Harum