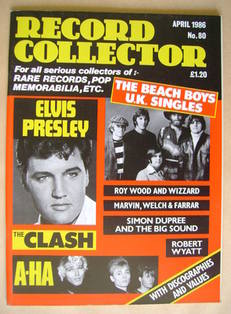 THE BEACH BOYS - Peter Doggett examines the 45rpm releases of the most successful American band in pop history, from the early years of the surfing craze to last year's comeback

MARVIN, WELCH & FARRAR - When the Shadows disbanded in 1968, original members Hank Marvin and Bruce Welch formed a vocal harmony trio, together with the Australian singer-songwriter John Farrar. Their records are now very collectable

ROY WOOD AND WIZZARD - John Van Der Kiste examines the solo career of the former leader of the Move, which has produced many rare and obscure items