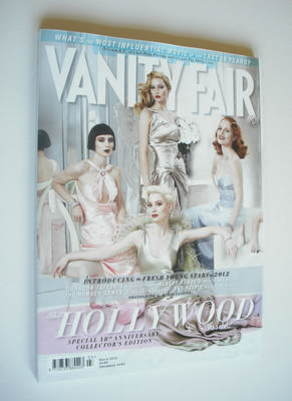 ARNOLD KLEIN - When famed dermatologist Arnold Klein, the Father of Botox, known for his flamboyant lifestyle and love of celebrity, landed Michael Jackson as a client, it was a dream fulfilled. But in the wake of Jackson's death, Klein has been engulfed by a toxic cloud of accusation, litigation and bankruptcy
9 pages

NICK ROSES - Meet Nick Roses, called "the most hated 21-year-old" in Hollywood, who climbed to the top of a growing field - child talent management - while still a kid himself. But Roses's tactics - he was accused of financially preying on young clients and their starry-eyed moms - have landed him in hot water
5 pages

DINER - For a little movie without special effects, dramatic reveals, or cutting-edge sex scenes - a movie about nothing at all, really - Barry Levinson's 1982 comedy, Diner, caused a tectonic shift in popular culture. It paved the way for Seinfeld, Pulp Fiction, The Office, and Judd Apatow's career, and made stars of Mickey Rourke, Kevin Bacon, Ellen Barkin, and Paul Reiser. Three decades later, S.L. Price reports how a novice director and his raw cast broke all the rules - and stumbled into genius
9 pages

ANJELICA HUSTON - 2 and a half pages

LAURA MULLEAVY AND KATE MULLEAVY - They don't double-kiss, they're not up on the latest industry gossip, and they live with their parents in Pasadena. But Kate and Laura Mulleavy, the inseparable sisters behind the Rodarte label, have swept the fashion accolades, taking couture down roads of their own choosing: horror movies, Renaissance painting, and, now, opera. As they collaborate with Frank Gehry on the L.A. Philharmonic's upcoming Don Giovanni, Evgenia Peretz explores the Mulleavy mind-set
6 pages

BRIGITTE BARDOT turned her back on stardom in 1973, at the height of her beauty - and went off to start her real life. As an exhibition of photographs of Bardot hits L.A., the curator, Henry-Jean Servat, gets a rare invitation to the St. Tropez sanctuary of the French legend, who expresses no regrets about her sex-kitten years and no interest in her image, but a total commitment to her cause
8 pages