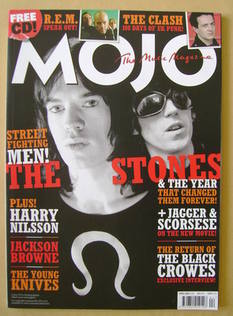 JACKSON BROWNE - Four and a half pages

THE BLACK CROWES - They're back and battling just as hard as ever. "We're believers, man!" they tell us

PUNK AT THE ROXY - Kris Needs, punk's own Boswell, looks back with the Pistols, Clash, Damned, Adverts and Buzzcocks on the speed, weed, sex and excess of London's infamous Roxy

THE ROLLING STONES - As wave after wave of unrest swept across the world, The Rolling Stones found themselves trapped in a psychedelic stupour. So just how did Mick Jagger reinvent himself as a totem for global revolution? We present an in-depth investigation into 1968: the year in which the band forged their future in dope, riots and musical reinvention