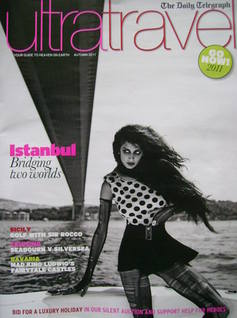 ISTANBUL - With it's Byzantine churches and Ottoman palaces, Istanbul can seem like a timewarp - but a new energy is running through it. Lisa Grainger finds 21st-century monuments rising among the minarets, from boutique hotels, rooftop bars and gourmet restaurants to startlingly contemporary museums

VERDURA - It is one of 13 glittering prizes in Sir Rocco Forte's rebuilt empire: Verdura, occupying a mile-long stretch of Sicily's south-west coast, with two 18-hole golf courses that remain sun-kissed well into October. Charles Starmer-Smith plays a round with Britain's most competitive hotelier

MEDITERRANEAN CRUISES - In the calm, indigo-blue waters of the Mediterranean, two lines, Seabourn and Silversea, are locked in a battle for supremacy. Both have relatively small ships, butler service and spas - but which is better? Adriaane Pielou joins two comparable cruises to find out

LUDWIG'S LEGACY - Inspired by Wagner to recreate a mythical, medieval past, the lonely King Ludwig II built fantastical retreats across Bavaria. His profligate spending cost him his throne, and his freedom, but over time has proved a brilliant investment. Autumn, says Adrian Bridge, is the best time to explore the enigma