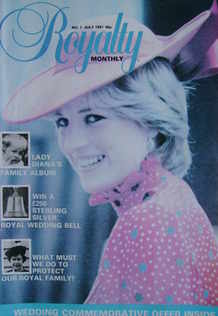 Fair condition - some creasing to front cover - some damage to spine

LADY DIANA'S FAMILY ALBUM - The Prince of Wales's fiancee celebrates her 20th birthday on July 1 and to mark the occasion, Lady Diana Spencer's family have opened up the family album for an intriguing look at the childhood and adolescence of the girl who will marry the heir to the throne at St Paul's Cathedral on July 29

ROYAL CHILDREN have to be public figures as well as civilised human beings. Historian Celia Clear on how royal parents have coped, from Victoria to the present day

ROYALTY TODAY - After events in Washington, St Peter's Square and, now, The Mall, Ann Buchanan poses the question - can we always leave it to God to save our gracious Queen?

ROYALTY IN FOCUS - The royal events of the last month captured by the world's finest photographers. This month, the Derby, Royal Ascot, Princess Alexandra in Ulster, the Kent christening

3 and a half pages

PRINCE PHILIP celebrated his 60th birthday in June. Always the most controversial of the male members of the Royal Family, what does the future hold for him?