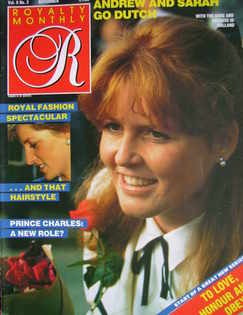 TZ'U-HSI: THE LAST EMPRESS OF CHINA - China was an empire until 1912 and one of the most remarkable of her rulers was the Empress Dowager Tz'u-hsi, the lady who spent the money for the country's new navy on a summer palace - as well as much other bizarre behaviour

PRINCESS ANNE - Never one to mince words, Princess Anne gave sections of the British Press both barrels in a recent speech. One of Fleet Street's finest records the shockwaves that have resounded around the Street of Shame

THE DUKE AND DUCHESS OF YORK in Holland

PRINCE CHARLES - The Prince of Wales celebrates his 38th birthday this month. Drawing on the evidence of recent television exposure, Margaret Holder considers the role that Charles can - and wants to - play while waiting in the wings as heir-to-throne