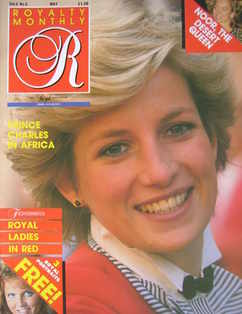 FASHIONWATCH: THE LADIES IN RED - Jayne Fincher's camera sees red this month as she captures the Royal ladies' current fascination with this most striking - and dangerous - of fashion colours. Or could there be a simple explanation?

ALL THE QUEEN'S HORSES - Will this be the year the Queen's stud produces a Derby winner? Brian Giles takes a look at Her Majesty's passionate interest and involvement in the Sport of Kings as the new Flat racing season starts

ROYALTY IN FOCUS - Who bought the Wallis Collection? A new book explores Queen Victoria's sex life! Diana in the disco with the Dynasty star. Charles digs in in Finsbury Park and gets some action in West Germany