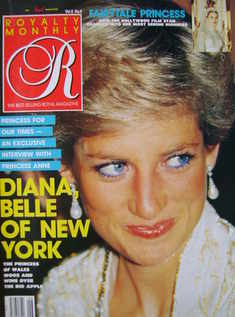 PRINCESS ANNE - In the first part of an exclusive interview with LWT's Brian Walden, the Princess Royal talks about her work for Save The Children Fund

WHEN THE SKIING HAD TO STOP - The New Year arrived with fresh blows to the stature of the Duke and Duchess of York as newspaper polls showed that their joint popularity was plummeting to new depths. Margaret Holder trails Sarah's determined campaign to shake off the "Duchess Dolittle" criticism

ROYALTY IN FOCUS - Prince Charles in Lockerbie; Prince William stars at football again; tragedy for French Pretender; with the Kents in Hong Kong