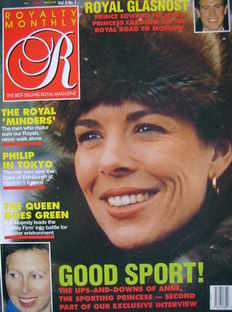 PRINCESS ANNE - In the second part of her interview with Brian Walden, the Princess Royal on her sporting life in and out of the committee rooms and the Olympics drugs scandal

THEY'LL NEVER WALK ALONE - Alert TV watchers may have picked out the men always a pace behind the Royals. They're the ones whose eyes never stop swivelling - the men from SO 14

FAR FROM THE MADDING CROWD - Fate decreed that the man born to be Edward VIII would not be married with all the pomp and pagentry. Our series on Royal Weddings ends in a French chateau

WHY PRINCE CHARLES HAD TO RETURN TO KLOSTERS - One year after the tragedy when Prince Charles's friend, Major Hugh Lindsay, was killed in an avalanche, why did the Prince return to the Swiss ski slopes?

THE DUCHESS OF GLOUCESTER - 1 page photo

ROYALTY IN FOCUS - Prince Charles in the New World; Prince Philip joins other Royals at Hirohito funeral; the Queen pays tribute to the Gurkhas