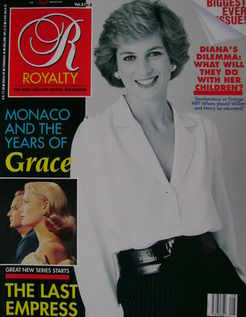 LADY SARAH ARMSTRONG-JONES celebrates her 25th birthday on May 1st - but there are those in Royal circles who speculate that soon there may be an even bigger celebration on the cards. True love, says Margaret Holder, seems to have found Princess Margaret's daughter in the shape of current boyfriend, actor Daniel Chatto

PRINCE CHARLES AND PRINCESS DIANA - In the heat and dust of the Arab Gulf States, the Prince and Princess of Wales were, as ever, the epitome of Royal 'cool'. Victoria Austin chronicles their recent trip and explains what really goes on behind the glamour of a Royal tour

GORDONSTOUN - OR GRANGE HILL? - The Prince and Princess of Wales have to make up their minds soon - where and how will their sons be educated?

MONACO: THE YEARS OF GRACE - An exciting new series which records the modern Grace Kelly fairytale - and what she did for the tiny Principality

ZITA: THE LAST EMPRESS - The life and times of the last Austro-Hungarian Empress whose death leaves vacant a position filled for 2,000 years

A FRESH LOOK: THE YOUNG PRETENDER - Was Bonnie Prince Charlie the romantic figure of legend - or an ambitious adventurer who destroyed a culture?

ROYALTY IN FOCUS - Why the Queen said "Yes" to the Soviet invitation; the death of Princess Eugenie; how Charles gets away from it all