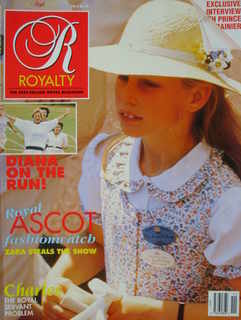 KING JUAN CARLOS - As the King who brought democracy back to Spain becomes the 970th Knight of the Garter, a history of the Order

WHO WAS ANNA ANDERSON? - Michael Thornton concludes his gripping appraisal of fresh revelations about the fate of the Tsar and attempts an answer

PRINCE CHARLES - The departure of yet another Private Secretary creates a problem for Prince Charles - who can work with him?

THE DUKE AND DUCHESS OF GLOUCESTER - 4 pages

HEAD GARDENER TO THE QUEEN EMPRESS - Born in Anglesey in 1843, Owen Thomas started worked on a local estate as a young lad in its gardens, earning a few pence a day. By the end of the century, he had risen to be Queen Victoria's Head Gardener at Windsor. His grandson Michael Laurens tells the story of how Owen worked his way up from humble beginnings to the very top of his profession in Victorian Britain

PRINCE RAINIER - As Prince Rainier celebrates 40 years in power, he gave this exclusive interview to Prince Michael of Greece

VICTORIA'S GRANDCHILDREN - The future Edward VIII called her a 'bitch of the first order'. Did Aunt 'Toria deserve the reputation of bitter old maid?

THE QUEEN MOTHER - in Canada