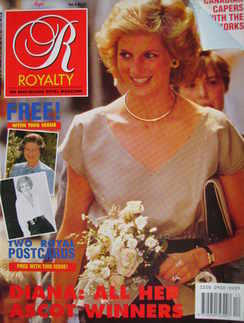 COME 1992, WHO'LL NEED THE ROYALS? - As Europe rushes towards economic and political integration, have the politicians thought about a role for the Royals?

FASHIONWATCH: THE ASCOT YEARS - A chronicle of the Princess of Wales's impact on the Royal fashion event of the year - from Shy Di to today's ultrachic

PRINCE RAINIER - The tiny Principality celebrates forty years of the benign rule of Prince Rainier. What's the man really like?

CORGI! THE OTHER ROYAL DYNASTY - Why the Royal passion for these Welsh cattle dogs goes back to the Queen's childhood

FRESH LOOK: KING HENRY VIII - The world envisages Charles Laughton when it thinks of Henry VIII. But Bluff King Hal was a monarch to fear...