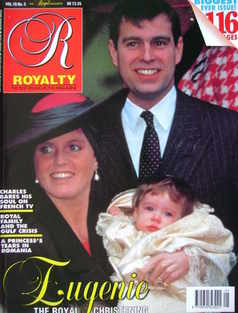 A ROYAL MESSAGE FROM HOME - The Queen and Diana in Germany, Charles in the desert - the Royal Family and the current Gulf Crisis

PRINCESS EUGENIE: THE CHRISTENING - The latest addition makes a lusty debut at the first public Royal christening at Sandringham

FAREWELL TO THE PUNK PRINCESS - She outraged European society, but Princess Gloria now sits atop a massive business empire

ASSASSIN! THE PRINCES IN THE TOWER - There were no bodies, but the Princes disappeared - but five centuries on, who did it?

PRINCESS BEATRICE on the ski slopes