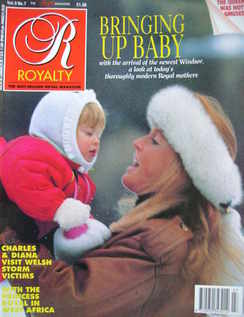 BRINGING UP THE MODERN ROYAL BABY - The nation celebrates the arrival of the newest Windsor, but how do Royal mothers now see their role?

HAS THE TSAR'S TREASURE BEEN FOUND? - For more than 70 years, the world has hunted the "Tsar's Treasure". Has it been found in Yugoslavia?

MARINA: THE QUEEN WAS NOT AMUSED - The reverberations of the Marina Ogilvy affair go on, and forced an unusual decision from the Queen

ASSASSIN! MURDER OF THE 'GOOD TSAR' - Alexander II was the "Good Tsar" who freed millions of serfs - but was still on the assassin's hit list

PARKINSON: ROYAL PRINTS CHARMING - A tribute to the late Norman Parkinson, the photographer who added a touch of Royal glamour

FRESH LOOK: BLOODY MARY - History is still unkind to the memory of 'Bloody Mary'. But she was the least ruthless Tudor