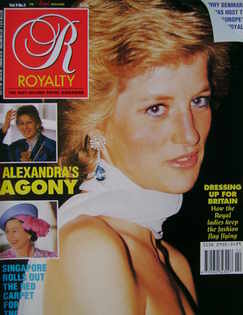 MARINA OGILVY - The tremors caused by the revelation that Marina Ogilvy, daughter of Princess Alexandra and Sir Angus Ogilvy, was expecting a baby by her lover, a 26-year-old photographer, have still to subside. The 23-year-old Marina - 24th in line to the throne - has accused her parents of trying to trick her into an abortion and demanding a "shotgun wedding". What lies behind these bizarre events? Our experts attempt to explain the affair that has shaken our Royal Family

RICHARD III - Shakespeare's play was written more than 100 years after Richard's death at the Battle of Bosworth - but did his powerful drama, depicting Richard as a nightmarish monster and played memorably in the film by Sir Laurence Olivier, distort the historical reality?

THE DUCHESS OF GLOUCESTER - 1 page photo