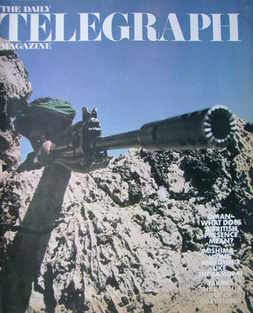 OIL: TROUBLE OR WEALTH FOR THE ARABIAN DESERT? - The old order in the Arabian peninsula has changed nowhere more suddenly than in Oman. We report on the complex situation in this mediaeval world in which British interests and influence are at stake
Five and a half pages

GRAHAM GREENE - Six wartime years separated The Power and the Glory from The Heart of the Matter, years in which, says Graham Greene in the final Introduction of the present series, his writing became rusty through disuse and misuse. But he spent part of the war in Freetown, Sierra Leone, where the tin roofs, vultures and laterite unconsciously became the background to the story of Major Scobie
1 and three quarter pages

YUKIO MISHIMA - Last year, Japan's best-known author, Yukio Mishima, committed hara-kiri in public. Behind the savage ritual of his death was a life dedicated to the preservation of the ideals of ancient Japan. Why did Mishima die? Have Western ways engulfed the samurai code of honour and noble behaviour?
Four and a half pages