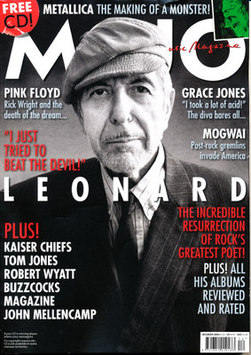 PLEASE NOTE: THE FREE CD WHICH WAS SUPPLIED WITH THIS ISSUE IS NOT INCLUDED

Leonard Cohen has never had a year quite like 2008. The last year have seen him fly out of music retirement to take his songs on the road once again - this time to his biggest audiences ever. We look back over a life brimming with music, women, Zen and the devil with the man they once called Captain Mandrax.

Paul Elliott catches up with the High Lord Of The Heavy Riff, James Hetfield, to deduce just how he’s managed to survive metal world domination, Alcoholica, rehab and rejuvenation. Plus we Mitchell delves into the story behind the globe-conquering Black Album and discovers why it was “the hardest record” the band have ever made.

We talk to the man once known as Johnny Cougar and discovers why the struggle to become a true artist is still so important.

Dodgy pacemakers aren't the usual concerns of the modern touring band, but post-rock kings Mogwai have never done anything by the book. We catch up with the Glaswegian collective during the American leg of their tour and finds out why music is more important than life, the universe and everything.

The recent death of Rick Wight marks the end of era in the Pink Floyd universe. We look at the life of the man who constructed some of Floyd's most beloved soundscapes. Plus his last-ever interview!